"If I could play the viola, I would do it the same way."

Wolfgang Wölfer was born in Austria on December, 22nd, 1971. After having studied the violin at the University of Music and Dramatic Arts Vienna he became the legendary Zakhar Bron's only viola pupil.

Between 1993 and 1998 he played in the Vienna Philharmonic Orchestra where he was a finalist at the audition for principal viola.

He taught the viola concert subject at Tokyo College of Music, Tokushima Bunri University as well as in his native country.

He performed together with famous musicians such as Zakhar Bron, Alissa Margulis, Bruno Giuranna, Gérard Poulet, Natasha Korsakova, Asako&Keiko Urushihara, Tomoko Kato and many others. He played at "Salzburger Festspiele", "Wiener Festwochen", "Haydnfestival", "Euro Arts Festival" and at many Japanese festivals.

His CD recording of the sonatas by Brahms turned into a bestseller in Japan and was praised as  the most interesting recording by the renowned music critic Akira Hirano.

He has conducted masterclasses in Austria, Germany, England, Japan and other countries and his students fill principal viola positions in notable orchestras in Europe and Japan.

Wolfgang Wölfer plays a viola built by Federico Goldnagl in Vienna in 1995.

He is endorsement artist at the string company "Thomastik-Infeld" and uses the "Peter Infeld" strings as well as the dark rosin by "Melos".

His CD recording of the Suites 1~3 for unaccompanied viola by J.S. Bach (Nami Records Tokyo, 2016) was hailed by critics.

The famous Japanese critic Ryuichi Shibata wrote: "Everyone who gets the opportunity to listen to this playing is blessed with deep gratitude."

The eminent classical music magazine Ongaku Gendai selected his Bach CD as the best soloistic string recording of the year 2016 alongside Kyung-Wha Chung. The critic's final statement: "If I could play the viola, I'd do it the same way." 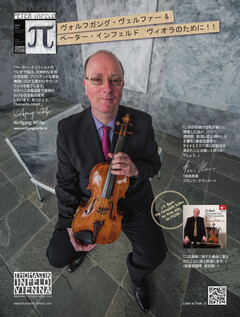 "If I could play the viola, I would do it the same way."